I've been using the Unusual Short Sales Activity tool from Shortable Stocks for a little while now, and I saw SNTI appear on the list some time ago-- September 19th to be specific. I didn't really think anything of it since I'd never heard of the company, but I made a mental note.
Then, it appeared on the list again on September 29th. I mentioned before in a recent article that repeated listings can be meaningful.
Well, lo and behold, what do I see on the top movers list for today? 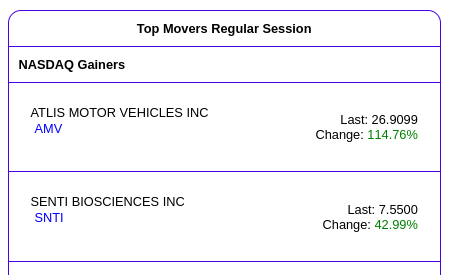 The days with arrows were the days it has appeared on the list in the last month. Now, to be sure, not all the stocks listed there end up being winners. But I've been focusing on the stocks that are expensive to borrow as a clue to a whether it will experience an explosive move.
Look at the image below. It's a screenshot of the tool for the 29th of September. I've only chosen to show the stocks with over $5M in short transactions for the day. If you had bought stock in SNTI after seeing it there, you would have experienced a bit of pain watching it retrace over the next couple of weeks. The clues were there though. Super high fee rate and even a negative rebate rate. Both of these things made it very costly to hold a short position for any length of time.

There are never any guarantees in life, but some things come close. This tool has been sniffing out a lot of winners in the last few weeks, and it's been doing it ahead of time for quite a few of them.
Check out this great new tool. It's only available with the standard subscription, which includes everything on the site. One trade can cover the cost of a subscription for years.